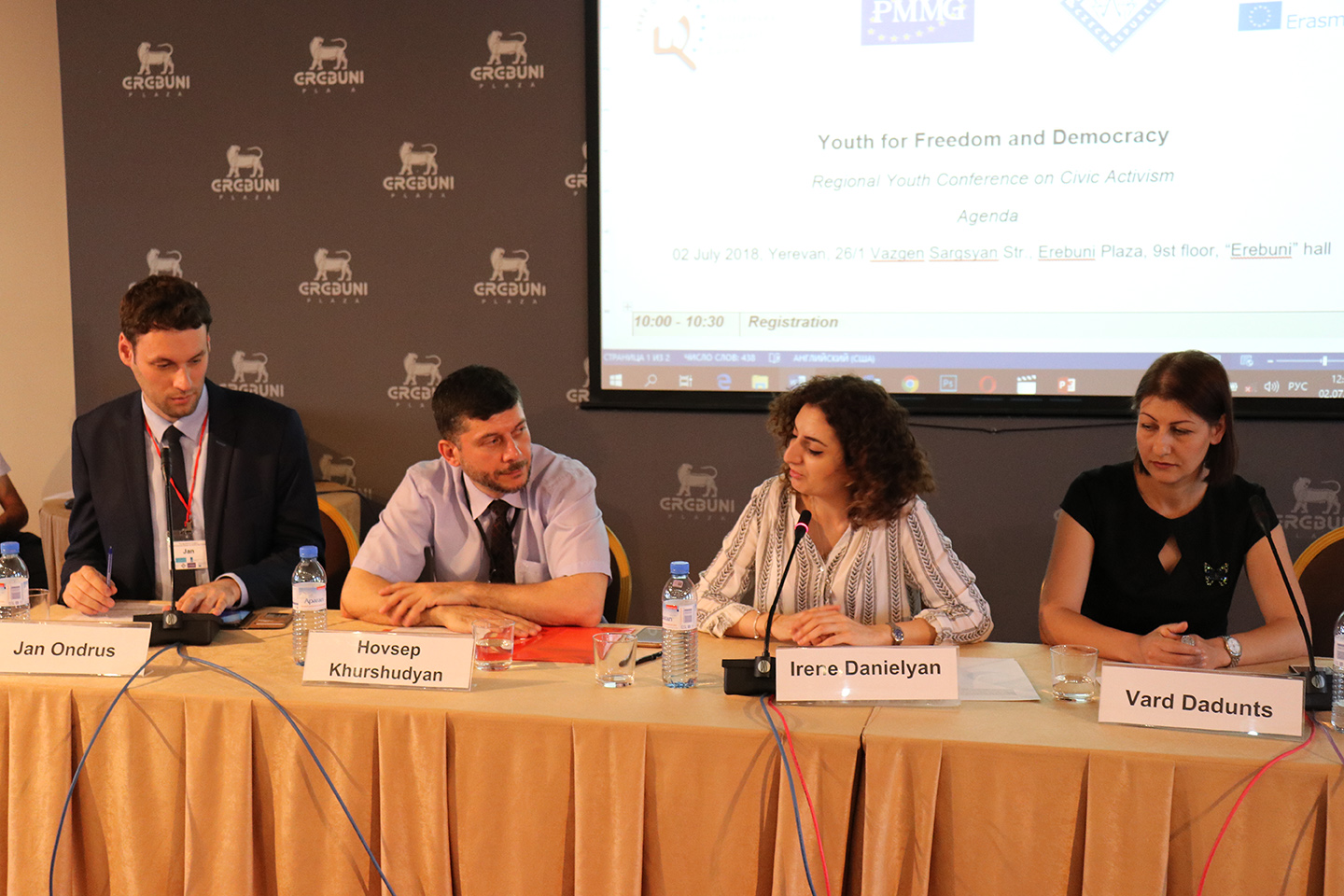 “Free Citizen” Civic Initiatives Support Center and Public Movement Multinational Georgia in partnership with People in Need (Czech Republic) and SALTO Eastern Europe and Caucasus Resource (Poland) launched a regional conference on civic activism “Youth for Freedom and Democracy” on 02 July 2018, in Erebuni hall of the “Erebuni Plaza” business center. The event concluded the 2-year Project “Young Activist”*, which was implemented in all the regions of Armenia and in five regions of Georgia. The aim of the Project was to strengthen the capacities of young civic activists engaged in social campaigning and other civic initiatives.

Fifty young people from all the regions of Armenia and 10 from the southern regions of Georgia participated in the Conference. All participants were selected on the basis of the results of 17 workshops, held in the regions of two countries in 2017-2018.

The Secretary of the National Security Council of the Republic of Armenia Mr. Armen Grigoryan, Ambassador of the Czech Republic to Armenia, his Excellency Mr. Petr Mikyska, the representative of the EU Delegation to Armenia Ms. Line Urban and “Young Activist” Project’s partner organisations participated in the ceremony. Video address by the Ambassador of the Kingdom of the Netherlands to the Republic of Armenia, his Excellency Mr. Johannes Douma presented to the participants of the Conference.

Mrs. Kristine Asatryan, Deputy Minister of the Ministry of Sport and Youth Affairs of the Republic of Armenia, Mr. Andrzej Parafiniuk, Chairman of the Board of the Podlaska Regional Development Foundation (Poland) Mr. Levon Barseghyan, President of the Journalists’ Club Asparez, “Reject Serzh” Initiative, Mr Jan Ondrus, Consultant, International expert in EU Neighborhood Policy (Slovakia), as well as many other officials, experts and civic activists attended the working sessions of the Conference and had a thematic presentations.

Many participants of the “Young Activist” Project were actively involved in the Velvet Revolution in Armenia, which took place in April-May 2018.

The role of Youth in the Velvet Revolutions in Armenia and Visegrad countries, as well as in monitoring and control of the central and local governments was discussed during the Conference. There was also an Award Ceremony for the winners of 2016, 2017 and 2018 for the nomination “Free Citizen” took place during the event. The awards was given to those citizens who have demonstrated an outstanding civic attitude and commitment and heavily contributed to the process of democratization of Armenia.

The Conference Agenda is here.

* The project “Young Activist” was implemented by “Free Citizen” Civic Initiatives Support Center (“Free Citizen” CISC, Armenia) and Public Movement Multinational Georgia (PMMG, Georgia) in partnership with People in Need (lead) and SALTO Youth Eastern Europe and Caucasus Resource Center (Poland). The project was funded by the International Visegrad Fund (IVF, Bratislava, Slovakia) and the Netherlands Government. In total, more than 300 young civic activists from the regions of Armenia and Georgia had the chance to participate in a set of workshops.

The aim of the workshops was to raise awareness among participants about the European Union, Council of Europe, Eastern Partnership, Visegrad 4 format, as well as provide general information about campaigning, including social media, lobbying, advocacy, public speaking and debating and other relevant topics.

Based on the results of the workshops, 20 selected young people from Armenia and 10 from Georgia participated in a 4-day Regional Summer School, which took place in June 2018 in Tsakhkadzor, Armenia. Thematic workshops and a special session on networking between Armenian and Georgian civic activists was organised during the event.

Finally, 10 young people from Armenia and 5 from Georgia took part in an 8-day study trip to the 3 Visegrad countries (Czech Republic, Slovakia and Hungary) in July 2018.