The Steering Committee deplores the arrest of Hovsep Khurshudyan, a member of the Steering Committee of the Eastern Partnership Civil Society Forum, amidst the protests on the night of 29-30 July 2016 in Yerevan. The authorities should drop charges of organizing mass disorder accompanied with violence under Article 225 of the Criminal Code against Mr Khurshudyan and other protesters. The Steering Committee demands the immediate release of their colleague, as well as that of all those who have been arrested by the police in recent days. 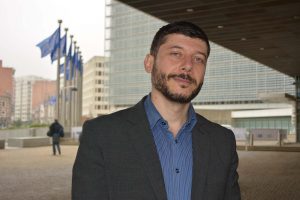 The citizens of Armenia have every right to demonstrate in support of their views while further police attacks on protestors risk more bloodshed. This lessens the chances of the development of a dialogue between the rulers and the ruled, which is the only way to resolve the present situation.

Brutal attacks by policemen in plain clothes against media representatives who were performing their professional duty at the recent demonstrations should also be deplored as a violation of the principle of media freedom.

The Steering Committee appreciates the fact that another member of the Civil Society Forum, Levon Barseghyan has already been released by the authorities in a gesture, which suggests that a peaceful end to this present tense situation is possible․

The EaP CSF also recognises the efforts of the Armenian Human Rights Ombudsman who is documenting the present human rights violations and the fact that the Prosecutor General’s office has opened inquiries into possible misdeeds by officials against media representatives and others.

Monitoring Mission of the Eastern Partnership Civil Society Forum on the civil society, media and human rights situation in Armenia / Summary of activities