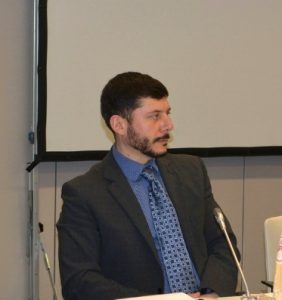 I would like to express my sincere gratitude for providing me with an opportunity to address you on behalf of the Eastern Partnership Civil Society Forum (EaP CSF).

One year into the process of implementation of the reviewed ENP the Eastern Partnership (EaP) region should remain the EU’s priority. While Georgia, Moldova and Ukraine managed to reach a significant level of political and economic rapprochement with the EU by signing the Association Agreements and DCFTA, the governments of Armenia, Azerbaijan and Belarus have chosen another path of cooperation with Europe. We should make use of the positive momentum for enhanced cooperation in light of the negotiations with these governments on the new Framework Agreements and other initiatives. The civil society’s potential should be capitalised on during the discussions between the EU representatives and EaP governments. The EU should provide appropriate channels for such involvement.

The European approximation of Georgia, Moldova and Ukraine is of particular appeal for the citizens and civil society of these countries and the rest of the region. In this respect the conclusion of the visa liberalization process for Georgia and Ukraine would provide for a further boost of the EU ethos. We encourage the EU ministers to conclude the process as soon as possible.

The EU is facing a great number of challenges related to the need for humanitarian support for millions of refugees, as well as the development of Euroscepticism, sometimes fuelled from outside. The EaP countries are contributing their fair share to providing solutions for these challenges. Armenia has welcomed the third largest number of Syrian refugees per capita. Since the start of the conflict, 18,000 Syrians have migrated to Armenia, according to UN High Commissioner for Refugees, 6 Syrian refugees per 1000 inhabitants. Since the beginning of the war in Ukraine, Belarus became the destination point for about 160 thousand Ukrainian refugees. The EaP region is also a primary battleground for Russian propaganda efforts and can be the key to delivering the right responses. Our countries are a part of the solution to the challenges the EU is facing and they should not be put on the back burner of the EU policy agenda.

The EaP region is not only a virtual battleground but a real one as well. Military conflict in Donbas and annexation of Crimea, as well as the four-day war in Nagorno-Karabakh in April this year can undermine the stability of the entire European continent. Crimea is turning into a military base posing a direct security threat to Europe. Various efforts providing for peaceful conflict resolution should be encouraged. In particular, the Vienna agreements on the Nagorno-Karabakh conflict on the strengthening the ceasefire regime, including the withdrawal of snipers from the line of contact, strengthening the monitoring mission and establishment of the investigation mechanism with the purpose of identifying the initiators of violations of the ceasefire regime, should be implemented as soon as possible.

The civil society of the Eastern Partnership countries, has been the main driving force behind the struggle of the peoples of these countries for democracy and human rights. Young people constitute a considerable part of societies in the EaP countries ranging from 25% in Moldova to 31% in Ukraine, and they remain affected by common challenges, such as high unemployment rate and various forms of discrimination. Unfortunately, the youth is not adequately represented in the policy making process. The young people should become true policy shapers in the EaP countries. In October 2016 the Eastern Partnership Youth Conference “Youth for Rights” organized by the EaP CSF brought together over 120 genuine young activists from the EaP countries, Russia and the EU who developed a set of recommendations aimed at a greater youth involvement in a number of policy areas, including environment and labour market.

A particularly pressing issue is the question of political persecution of civil society and political activists by the authorities. In case of Ukraine its nationals have been kidnapped from its territory and imprisoned by the Russian law enforcement agencies. In case of Armenia, Azerbaijan and Belarus the political persecution is perpetrated by the authorities against their own citizens. The EaP CSF has repeatedly demanded the immediate release of all political prisoners and their rehabilitation.

Together with my friends and colleagues I was also arrested in late July this year and spent a month in prison on fabricated criminal charges based on the false testimony of two police officers after taking part in a peaceful demonstration to express my civic position and political views. The charges against me and my colleagues have not been dropped so far and many of them are still in jail. The EaP CSF introduced a new instrument this year in connection to the recent developments in Armenia. Our Monitoring Missions will be deployed to the Eastern Partnership countries on a regular basis in order to assess the situation of the civil society, media and compliance with the human rights standards.

Armenian society is in vital need for democratic reforms focused on reducing corruption and addressing the issues of political and economic monopolies.

The EU has formally launched a Mobility Partnership with Belarus to ensure better management of migration flows. While Belarus is demonstrating continued efforts towards effective border management, the authorities should make headway in implementing other important commitments, such as the Roadmap for Higher Education Reform, Convention of the Rights of People with Disabilities, as well as finding inclusive implementation mechanisms for recently adopted Interagency Plan of Implementation of Recommendations for Belarus from UN mechanisms. The process of building a nuclear power station in Astravets also raises concerns of civil society regarding security and safety issues, as well as interdependence with other obligations and conventions in environmental field Belarus signed, which also require appropriate actions from the national government.

Georgia demonstrated a peaceful and democratic election process and requires continuous support in strengthening its ties with the EU.

Moldova has just conducted an election that confirmed the dropping support for the EU. The financial and political support to the CSOs and human rights defenders by the EU would instill the trust in European democratic values.

Ukrainian government should focus on tackling the economic challenges and addressing the corruption.

Thank you very much for your attention.