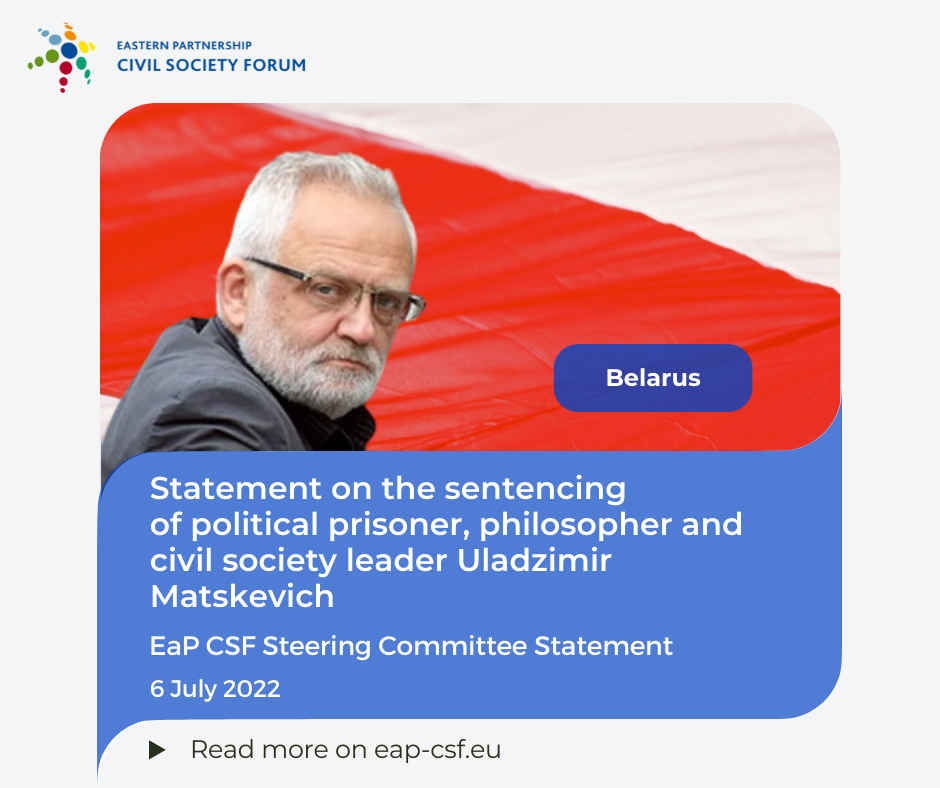 On 23 June 2022, Uladzimir Matskevich, philosopher and civil society leader, was sentenced to 5 years of reinforced regime imprisonment by the Minsk Regional Court in a politically motivated trial. Mr Matskevich was detained on 4 August 2021 and declared a political prisoner on 6 August 2021. This unjust and politically motivated imprisonment and sentencing is yet another move by the Belarusian authorities to intensify human rights abuses, political persecutions and to suffocate dissent and freedom of speech. This extremely concerning situation calls for an urgent, structured and sustained response from all stakeholders.

Uladzimir Matskevich has been for years one of the most prominent voices in Belarusian civil society. Through his books, lectures, articles and actions, he has contributed to the development of Belarusian civil society and shaped Belarusian philosophical and humanitarian thought. In the early stages of the Eastern Partnership policy, Mr Matskevich founded the EaP CSF Belarusian National Platform and participated in the creation of the Eastern Partnership Civil Society Forum. He is the author of the formula “Think Belarus”, the founder of the Agency of Humanitarian technologies, the first Head of the Council of the international consortium “EuroBelarus” and the founder of the “Flying University” (Лятучы ўніверсітэт).

Without any end in sight to the spiral of violence Belarusian authorities are caught in, there will only be further destruction. The Steering Committee of the Eastern Partnership Civil Society Forum calls on:

The European Union and Member states:

To the press, human rights activists and civil society: